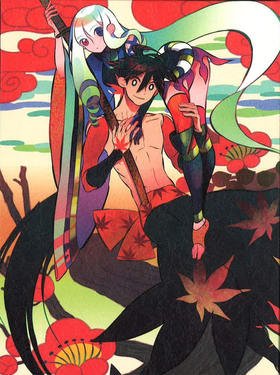 A twelve volume novel series by NisiOisiN and illustrated by Take, later adapted into a 12-Episode Anime in 2010. Despite the similar name, it is not related to Isin's other work Bakemonogatari. A spin off, Maniwagatari, was released.

The legendary swordsmith Kiki Shikizaki made 1000 swords in his career. His skill was such that entire wars were decided by how many of his swords each side had. When the Shogun emerged victorious, he collected the first 988 of those swords... but those were just practice for Shikizaki.

The final twelve swords were the pinnacle of the swordsmith's career. Each of them has powers so extraordinary that just a single man could defeat small armies while wielding one of them.

Shogunate strategist Togame has been ordered to recover them. She first hired a Ninja...but the worth of the swords is so great that the entire ninja clan defected the moment they recovered one. Then she hired a swordsman... but he kept the sword for himself after finding it and went rogue.

Her last hope is Shichika Yasuri, the seventh head and last practitioner of Kyotouryuu, the No Sword School. He and his elder sister live on an island cut off from civilization, and as such they need no money. His fighting style doesn't use a sword, so the famous weapons are useless to him.

So why should he agree to help? Only one option remains — they must fall in love.

The anime adaptation is notable for its highly unusual approach. Not only does it use a very stylized, angular Thick-Line Animation visual style rooted in the light novels' equally stylized illustrations, but its episodes are fifty minutes each and were aired monthly over the course of a year, as opposed to the industry standard of 22-minute weekly episodes. It also has a prequel Drama CD series by the author bundled with the DVD/BDs.