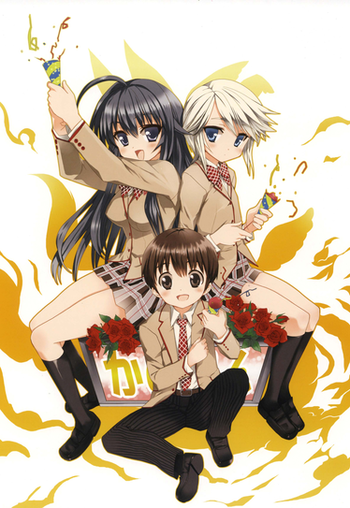 Kanokon is a 2005 Light Novel-turned-Manga and, in 2008, an Anime. It revolves around young exchange student Kôta Oyamada, who starts at a new school, only to be approached by the most attractive girl on campus almost immediately. Chizuru Minamoto lures him to an empty classroom and immediately attempts to force herself on him, only stopped by the appearance of her ears and tail.

Yes, ears and tail — Chizuru is, in reality, a 400-year-old kitsune who's going to school to learn about the modern world. Attracted to Kôta because of his childish innocence and scent of the countryside on him, she spends her days attempting to seduce him in more and more over the top ways. Later, other non-humans show up, including a wolf-spirit named Nozomu, who immediately attempts to beat Chizuru at her own game, several assassins, a teacher or two, etc. Meanwhile, poor Kôta has to put up with having the extremely busty Chizuru and the small and cute Nozomu, each competing to find more and more ways to take his virginity.

The series later got a two-part OVA taking place in the summer months, as well as a wide variety of fanservicey extras on the DVDs.

Compare with Venus to Mamoru!.

This page is only about the light novel and manga versions.