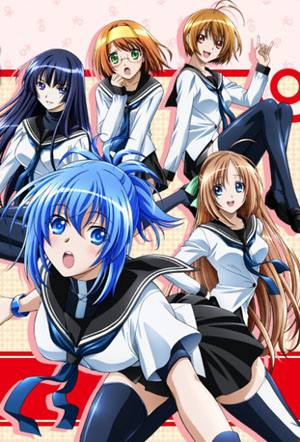 Kämpfer (the umlaut is the difference between being German for "fighter" and camphor) is a Japanese light novel series with both a manga and an anime adaptation available. The original light novels were published from 2006 to 2010 for 15 volumes, while the manga adaptation was serialized in Monthly Comic Alive from 2008 to 2013. The anime adaptation aired in the fall of 2009, with a second season in spring 2011.

The story starts with Natsuru Senou, an Ordinary High-School Student attending a gender-segregated school. He has a crush on local school beauty Kaede Sakura, who has a collection of Entrail Animals, stuffed animals styled in brutal ways of dying. One day, he wakes up to find himself mysteriously transformed into a girl. Immediately afterward, he finds a bracelet strapped to his wrist that he didn't remember putting on, and then a stuffed tiger doll named Harakiri Tora telling him that he was chosen to become a Kämpfer. On one hand, Natsuru gains great strength and fighting abilities. On the other hand, it's apparently a rule that Kämpferinnen can only be girls, so any boys that are chosen transform into girls when their powers activate, while those who were girls from the start transform in other ways.

Natsuru gains the attention of other Kämpferinnen, including shy bookworm Akane Mishima who transforms into a gunslinging loudmouth, the beautiful but scheming student council president Shizuku Sangou, and later Natsuru's childhood friend Mikoto Kondou. Kaede Sakura herself falls for Kämpfer Natsuru after she saves her from Akane, and views Natsuru as a rival for her affection. Hilarity Ensues.

...at least until other Kämpferinnen decide to fight him for reasons unknown even to them. Somehow, the Kämpfeinnen are chosen by talking stuffed animals called Messengers, who are being distributed by an unrevealed entity only known as "The Moderator". The Messengers then inform the Kämpferinnen who have been chosen that they have to fight each other to the death. The Blue and Red Kämpfer factions form and battle, with a third White faction forming from those who do not wish to fight. The blue Kämpferinnen Natsuru and Akane, and the non-Kämpfer Sakura, are dragged into this war and must survive, all while fighting against the sinister plans of The Moderator.

Has a character sheet of its own.

A set of two OVAs under the title Kämpfer für die Liebe ("Kämpfer: Fighter for Love") were released in spring of 2011. The first is a kind of sequel to the series and the second is pure waitress fanservice.

Completely unrelated to that other Kampf.