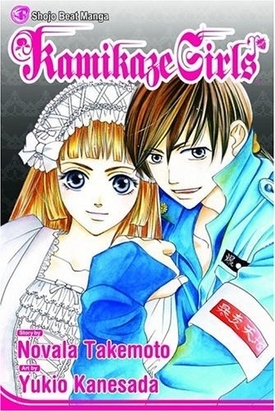 A Japanese novella by Novala Takemoto, Kamikaze Girls (Shimotsuma Monogatari) is the odd tale of sweet lolita Momoko Ryugasaki. When her father, a small-time gangster, gets in trouble for bootlegging counterfeit Versace with the Universal Studios Japan logo, the two are forced to move to rural Shimotsuma, Ibaraki... which, to Momoko's considerable chagrin, doesn't have a single Lolita brand store.

Unable to find her Rococo zen, Momoko tries to sell some of her father's Versace products for cash and ends up friends with yanki girl Ichigo "Ichiko" Shirayuri, who's a bit slow, a bit rough, and has a taste for tacky bootleg Versace. Despite Momoko's initial dismay, the two become an inseparable pair, and soon embark on a quest to find the legendary embroiderer Emma.

Charming and filled with pop culture references, it's told from Momoko's frequently selfish and straightforward first-person voice. There's an excellent English translation by Masumi Washington, a comedy movie adaptation featuring Kyoko Fukada as Momoko (for which she won best actress at the Yokohama Film Festival) and Anna Tsuchiya as Ichiko, as well as a manga adaptation being published by Viz. Recommended for anyone with an interest in Slice of Life, Japanese pop culture, and stories about friendship.