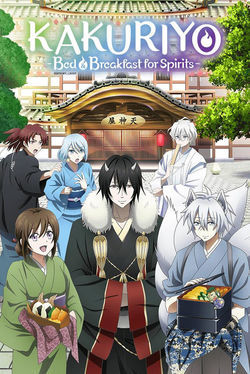 Kakuriyo: Bed and Breakfast for Spirits (Kakuriyo no Yadomeshi in Japanese) is a Japanese light novel series written by Midori Yūma and illustrated by Laruha. 8 volumes have been published since 2015. A manga adaptation was drawn by Wako Ioka in 2016. A 26-episode anime television series adaptation by Gonzo premiered on April 2, 2018.

Kind but practical college student Aoi Tsubaki has the ability to see Ayakashi (spirits or demons), a trait she inherited from her recently deceased grandfather. In the habit of feeding ayakashi in the Apparent Realm (the human world), she gives food to a hungry ayakashi at a shrine. But soon after, our heroine is kidnapped by said ayakashi - an ogre called only "The Master" (O-danna-sama). He takes her to the Hidden Realm - where all the Ayakashi live and reveals himself to be the innkeeper of a prestigious establishment called Tenjin'ya. And, more importantly, Aoi's late grandfather owed him a debt and had promised Aoi as collateral - meaning that as compensation, Aoi must marry the ogre. Aoi negotiates with the Ogre instead, choosing to work off her grandfather's debt by cooking at a restaurant at the inn.

However this deal comes with a time-limit, and Aoi finds herself in a Beauty and the Beast style situation (complete with magical flower), as if she cannot pay off the debt, she will be forced to marry the Master - which, as the story progresses, starts to look like less of a chore. Other plot points involve Aoi's tragic past, her different interactions with other employees at the inn and the dangers of malicious ayakashi.

Has been compared to Kamisama Kiss.

Kakuriyo: Bed and Breakfast for Spirits contains examples of: