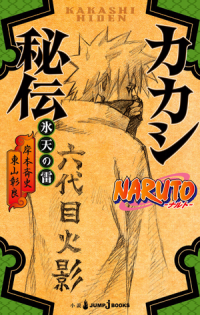 Kakashi Hiden: Lightning in the Icy Sky, written by Akira Higashiyama, is set shortly after Sasuke's departure from the Hidden Leaf. Kakashi is in no hurry to officially take over as Hokage, so Tsunade is still in charge -much to her chargin. She tasks Kakashi with providing security for the Tobishachimaru's maiden voyage. Things seem to be going well, until a group of terrorists is discovered planting explosive tags on the airship.