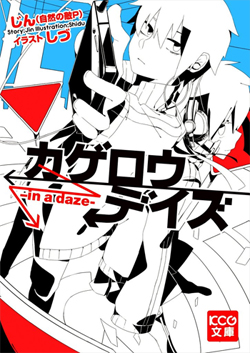 Shintaro Kisaragi is a typical shut in: he refuses to leave the house, has an unhealthy addiction to the internet, and doesn't have a job nor any plans of getting one from the outside world. A year into this lifestyle he receives a mysterious e-mail which installed Ene — a strange cyber-girl program which seems to have her own sense of self — onto his computer. She is quick to declare Shintaro as her 'master' and has made the young HikiNEET's life a living hell ever since.
Advertisement:

A year after meeting this enigmatic being, Shintaro decides to try and earn some money by producing music with a voice synthesizer program. Soon after beginning the composition of one song, however, Ene goes out of her way to tease the poor guy and prank him, resulting in a broken keyboard and mouse. Since it was a holiday, he would have to wait two days before he could get a new computer through online shopping... so now he had to choose: Wait and live without internet until the holiday passes, or go outside and buy one himself.

Deciding that there was no way he could survive without internet, he leaves the house for the first time in two years.

Kagerou Daze is a novel series written by song producer Jin(Shizen no Teki-P), and is a part of a series called the Kagerou Project.

A manga was published monthly on Comic Gene for a thirteen volume run , and an anime loosely following the events began airing on April 12th, 2014.

Much of the background of the characters in the novel are told in the songs for the series, so it's highly recommended that you check them out.

Please only list down tropes from the novel and manga here. If it refers to the series as a whole, the anime adaptation, or any of the songs, please list them down on their respective pages