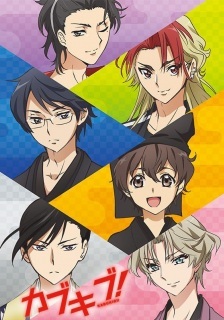 Kurogo Kurusu, a 15-year-old high school student, has a passion for kabuki and hopes to establish a kabuki club at school. Things are not easy as they seem when he realizes that he needs to find students to join him.

Kabukibu! (カブキブ!) is a light novel series written by Yūri Eda, with illustrations by Ishinoya. The series began on August 24, 2013 and has since collected five volumes, published by Kadokawa Shoten as of December 2016. An Animated Adaptation by Studio DEEN, with original character designs by CLAMP, premiered on April 6, 2017.