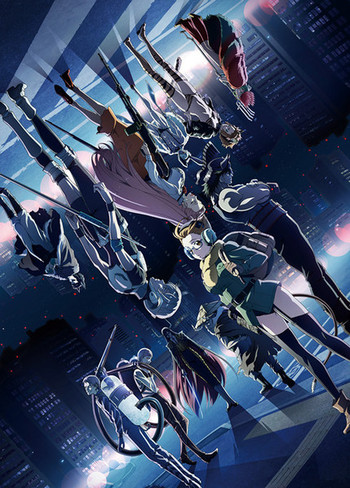 Every twelve years, an organization hosts the Zodiac War — a deadly battle royale where its participants must be cunning, crafty, and above all willing to kill to reach the top. Twelve brave, determined warriors who bear the names of the signs of the Eastern Zodiac fight each other for their lives and souls, using a wide variety of powers to augment their chance of success. Beginning with ingesting poison Beast Gems, the participants have 12 hours to kill the rest of the warriors to get the antidote; only then can the victor of this tournament receive their coveted prize: to have one wish granted, whatever that wish may be.
Advertisement:

Juni Taisen: Zodiac War (lit. "The War of Twelve") is a light novel written by NisiOisiN and illustrated by Hikaru Nakamura. An anime adaptation by Graphinica has aired for the 2017 Fall Season, with Nisio stablemate Akira Akatsuki drawing a manga adaptation of the book in September of the same year. Funimation's Simuldub premiered on October 18th, 2017. Watch it here

The book received a sequel, Juni Taisen vs. Juni Taisen, in December 2017.

"Everybody, clap your hands!"