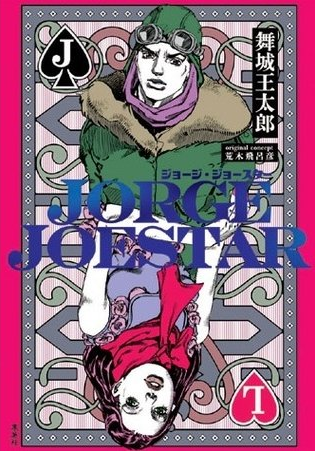 Jorge Joestar is a Light Novel written by Ōtarō Maijō and illustrated by Hirohiko Araki, set in the universe of JoJo's Bizarre Adventure. Released in 2012 as part of the Milestone Celebration "VS JOJO" projectnote where various authors wrote light novels in the world of JoJo, all illustrated by Araki, it is generally considered non-canon.

There are two plotlines in the book; the odd-numbered chapters concern the life and times of Jorge Joestar II (Joseph's father, previously introduced as George), as he grows up, falls in love with Lisa Lisa, and becomes a pilot during World War I. The even-numbered chapters tell the tale of Joji Joestar, a young detective whose investigation leads him to meet Giorno Giovanna and Rohan Kishibe, and all three fall into a bizarre tale of Cosmic Retcons and old foes returning anew.

The most (in)famous thing about the novel is that its second plotline is utterly bizarre - even more so than the series itself, which is saying something. Elements from the first seven parts are mixed together with no regard for coherence, and the end result is widely regarded as memorable for this exact reason.

Note: Due to the difficulty in concealing them, all spoilers from JoJo's Bizarre Adventure are unmarked. (Spoilers from the actual story are properly hidden, however.)