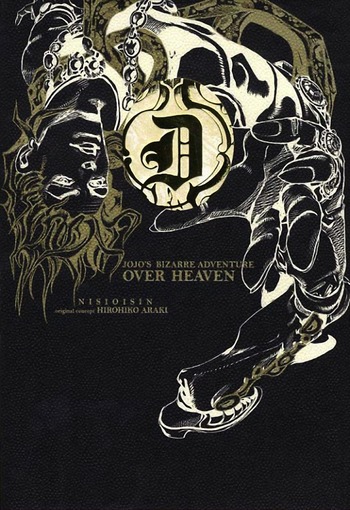 Dio, no matter what happens, live nobly and with pride. If you do that, you'll surely be able to go to Heaven.
Advertisement:

JoJo's Bizarre Adventure Over Heaven, shortened to Over Heaven, is a Light Novel written by NisiOisiN of Bakemonogatari fame and illustrated by Hirohiko Araki. Released in 2012 as part of the Milestone Celebration "VS JOJO" projectnote where various authors wrote light novels in the world of JoJo, all illustrated by Araki, it is considered of dubious canonicity.

Over Heaven is presented as Dio Brando's long lost diary which gathers in chronological order his thoughts, commentaries about the current events of Stardust Crusaders and his own retrospective about his whole life, thus making it a Perspective Flip of the JoJo's Bizarre Adventure series. In the course of his writing, Dio mixes recollection and thoughts about his past and the events of Phantom Blood during which he developed a respect for his archenemy Jonathan Joestar, commentaries about the numerous defeats of his minions as Jotaro Kujo and his other enemies travel from Japan to Egypt, philosophical debates about the very nature of happiness. Driven by his mother's teachings and his evil nature, Dio thus begins to formulate a plan in order to go to a hypothetical Heaven and write it in his diary, hoping that in the case he dies, his allies will find it and complete his scheme.

The book is filled to the brim with Continuity Nods, but also offers an Alternative Character Interpretation of Dio Brando. While in the series, Dio Brando is a villain whose ambition drives his every action, the diary suggests that Even Dio Loves his Mother. Dio's own mother and several characters with Incorruptible Pure Pureness deeply influenced him and in a way, Dio tries to honor their memories by creating Heaven on earth.

Over Heaven provides examples of the following tropes: