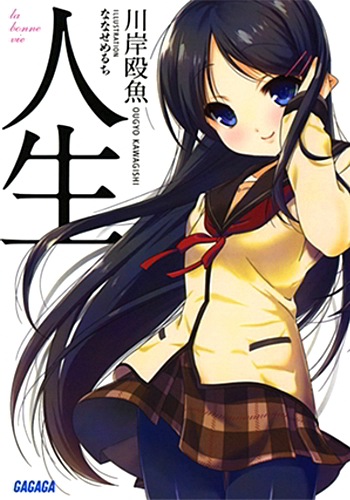 Volume 1, with Rino Endou as its cover girl
Advertisement:

Yuuki Akamatsu, who is in the Kyuumon Gakuen Second News Club, is asked to become the counselor of the club immediately after joining the club by Ayaka Nikaidou, the club leader. Joining him for this task are three other students, three female schoolmates who are supposedly experts in their given fields of focus: science representative Rino Endou, liberal arts representative Fumi Kujou, and physical education representative Ikumi Suzuki. Together they answer requests from students about whatever it is that's troubling them. However, the three always have different opinions and cannot get their views to agree, so they just try things out anyway...

Jinsei (人生, lit. "(Human) Life"), subtitled La Bonne Vie, is a light novel series written by Ougyo Kawagishi and illustrated by Meruchi Nanase. As of February 2014, seven volumes have been published by Shogakukan under their Gagaga Bunko imprint. A manga adaptation "Jinsei ~Chapter of Manga~" (人生～マンガの章～) illustrated by Seiji Matsuyama is currently being serialized on Shogakukan's Sunday GX. An anime adaptation by Studio Feel aired during the Summer 2014 Anime season.

Jinsei gives examples of the following: