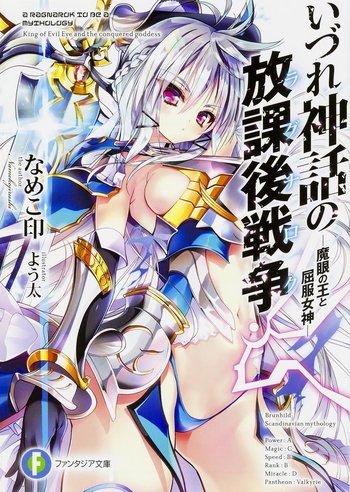 Izure Shinwa no Ragnarok (いづれ神話の放課後戦争) is a light novel series written by Namekojirushi and illustrated by Youta. Ten years ago, gods from seven mythologies possessed the bodies of humans and ravaged the planet in their war. During this Myth War, Raika Shinzen and his sister were cornered by a god, who injured the former and kidnapped the latter. As a teenager, Raika attends school on Laurasia Island, an artificial island managed by the organization, Eucharistia. The students there are supposedly being quarantined due to being cursed by the gods, but in reality, they're all marked to be potential hosts for gods in the next Myth War. Raika ends up being partially possessed by the Celtic god Balor, who gives him the ability to place other gods under a Geas if he defeats them. With this power, Raika hopes to take revenge on the gods and find his kidnapped sister.