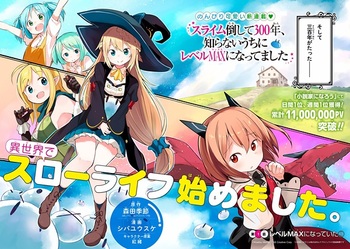 The Witch of the Highlands, Azusa, surrounded by her apprentices and "children"
Advertisement:

The series tells the story of Azusa Aizawa, a regular Japanese salarywoman who finds herself dying from overwork at age 27. A merciful goddess takes pity on her, and offers her a new life in another world, where she's free to live the simple, carefree, and easy life Azusa has always wanted. She takes the offer, and finds herself an immortal witch in a medieval fantasy world.

Azusa proceeds to enjoy her new life for the next 300 years, laying around and relaxing, becoming an herbalist and medicine woman for the nearby village of Flatta, and making some money on the side by killing the slimes and selling their cores at the guild. Trouble starts when she takes a power assessment on a whim, and she and the receptionist Natalie discover that Azusa has become max level, with the highest stats possible, and access to a number of incredibly powerful spells and abilities beside. In spite of Azusa's efforts to keep it secret, word spreads of the all-powerful "Witch of the Highlands" and all manner of adventurers, dragons, and vengeful spirits come knocking on her door...

Starting life in 2016 as a Web Novel, the series was picked up by SB Creative in 2017 and distributed as a Light Novel series; beginning with Volume 5 in 2018, some of the novels have had special editions which come with Drama CDs. The same year the light novels began, a manga adaptation was published by Square Enix for their online platform, GanGan Online, illustrated by Yuusuke Shiba (シバユウスケ). Official English translations of the novels and manga are produced by Yen Press, though the novels don't come with the Drama CDs. An anime adaptation of the novels was announced in 2019, with the cast of the Drama CDs reprising their roles, and began airing in April 2021.

You can view the first Japanese anime trailer here