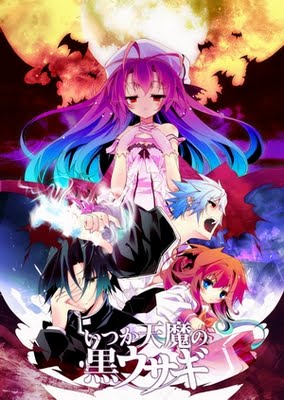 "The Devil's Black Rabbit of an Unknown Time.", aka, "A Dark Rabbit Has Seven Lives."
Advertisement:

Kurogane Taito is a freshman in Miyasaka High. Being rendered unable to perform karate due to an accident, he believed himself to be a normal guy. But an accident that should have killed him occurred. And the lost memories of a childhood love with the vampire, Most Ancient Sorcerer, Saitohimea, came flooding back from nine years ago. Soon he was once again plunged into the mysterious, with the destinies of their allies and foes already woven and foretold in an ancient prophecy of epic proportions.

Based on a Light Novel by Takaya Kagami of Legend Of The Legendary Heroes and later Seraph of the End fame and illustrated by Yuu Kamiya, it has an ongoing manga illustrated by Shiori Asahina, and an anime series for Summer 2011 produced by ZEXCS. It also has a Spin-Off series, Kurenai Gekkou no Seitokaishitsu (Gekkou Kurenai's Student Council Room).