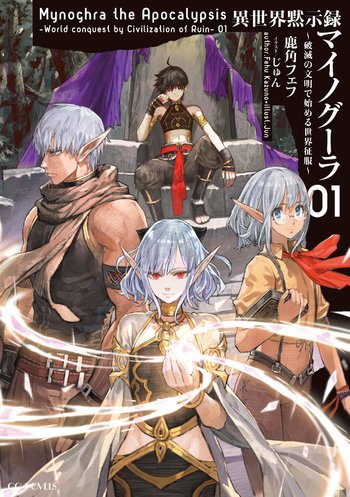 "Let's build our own country. A kingdom just for the two of us."
— Ira Takuto
Advertisement:

After passing away at a young age to illness, Ira Takuto wakes up and finds himself in a forest. He is approached by Atou, a girl who bears a striking resemblance to a character in his favourite real-time strategy game “Eternal Nations”. Prior to his death, Takuto had achieved legendary status amongst players of Eternal Nations for clearing the game on the hardest difficulty with the most difficult, Evil-aligned civilization, “Mynoghra, the civilization of Ruin”. Atou, a Hero Unit from this civilization, explains that while she doesn’t know where they are at the moment, she still remembers all the times they spent together in the game world. On her suggestion, the pair decide to start the new country of Mynoghra once more.

Isekai Apocalypse Mynoghra ~The World Conquest Start with Civilization of Ruin~ is a web novel written by Kazuno Fehu. The story has also been adapted to manga, with art by GOMI Hidekazu.