Light Novel / Is It Wrong to Try to Pick Up Girls in a Dungeon? 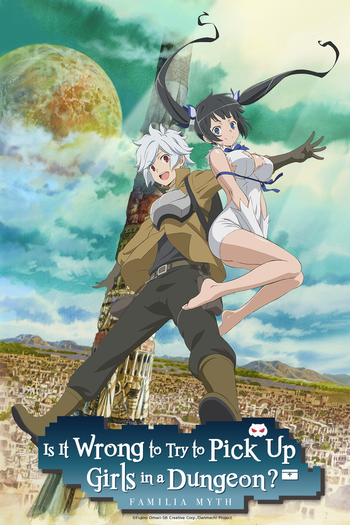 Introducing: The Hestia Familia
"Is it wrong to try to pick up girls in a dungeon?"
— Bell Cranel
Advertisement:

Sitting on top of a multi-level underground maze aptly called the Dungeon, Orario is a society that is centered around Dungeon Crawling, assisted by falna, the blessing descended gods give to the Earthlings that comes with rules that look suspiciously like our RPG mechanics.

Enter Bell Cranell, the 14-year-old rookie adventurer who started crawling the Dungeon because... he wants to pick up girls, but between the Dungeon, Orario, and the gods, the universe isn't what it seems... Let's say, the first time he actually sees a girl in the Dungeon, he's the one being saved...

Is It Wrong to Try to Pick Up Girls in a Dungeon? (Danjon ni Deai o Motomeru no wa Machigatteiru Darō ka?), otherwise known as DanMachi, is a Light Novel written by Fujino Omori and illustrated by Suzuhito Yasuda. It received an anime adaptation in the Spring 2015 Anime lineup and also a manga by Kunieda, and has the distinction of being the first light novel ever released in English (by Yen Press) BEFORE an anime adaptation aired, i.e. before it was widely known to non-Japanese audiences. Season 2 aired in summer 2019, with Season 3 following in fall 2020. Season 4 has been announced and is currently slated to air in 2022.

Crunchyroll is streaming all three seasons of the anime, which can be viewed here

for people in the following areas: note USA, Canada, Australia, New Zealand, South Africa, UK, Ireland, the Netherlands, Scandinavia, Turkey, Latin America, and the Middle East.. The home video is licensed in the United States by Sentai Filmworks, and despite the realignments in the intervening yearsnote Crunchyroll is aligned with Sentai's competitor Funimation, the fact that both companies hold a chunk of the franchise means, eventually, both seasons of the anime are livestreamed on both Crunchyroll and HiDive, Sentai's own streaming service.

Is It Wrong to Try and List Examples of a Work's Tropes?