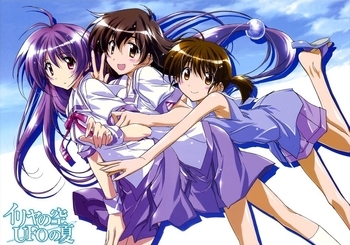 Iriya no Sora, UFO no Natsu (InS,UnN in short on this page. Means, literally, "Iriya's Sky, UFO's Summer") originates as a four volume Light Novel series. Written by Akiyama Mizuhito, it tells the story of Iriya Kana and Asaba Naoyuki, involving aliens, love, and angst. Lots of it. An OVA series had been made, and a manga series is still on-going.