Light Novel / INVADERS of the ROKUJYOUMA!? 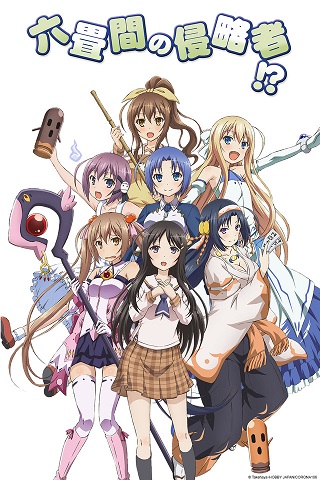 "Love is all."
Advertisement:

Their initial fight over who gets the room gets them smacked down hard by Koutarou's landlady/classmate Shizuka Kasagi, forcing them to live together peacefully while they sort the whole thing out. While this may seem like the setup for a generic gimmicky harem comedy, both the characters and the setting soon display Hidden Depths, with romance present but de-emphasised in favour of the strong bonds of friendship and familial love that develop between the entire cast. Over the course of the first arc, the conflict over Room 106 is gradually forgotten as its residents form into a Badass Crew and start pooling their resources in order to tackle the problems which drove them to "invade" in the first place.

Rokujyouma no Shinryakusha!? (lit. Invaders of the Six-Tatami Mat Room!?) is a light novel series written by Takehaya and illustrated by Poco, consisting of 38 volumesnote 1-36, plus 7.5 and 8.5 as of October 2020 (see the recap page for more details). It has been localized into English by J-Novel Club under the title Invaders of the Rokujouma!?, and can be purchased online from Bookwalker

in some regions under the title INVADERS of the ROKUJYOMA!?.

, along with a companion set of online Short Stories subtitled "Heracles" (which have since been compiled into the books proper). A series of Audio Plays has also been produced, including both side-stories and a Compressed Adaptation of volumes 7.5 and 8.5.