Light Novel / I'm In Love With the Villainess 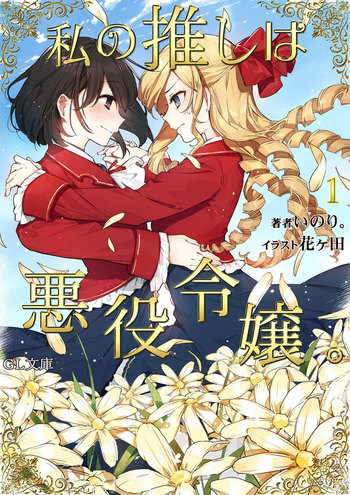 Left to right: Our protagonist, Rei, and her love interest, Claire.
Formerly a regular Japanese Office Lady who overworked herself to death, our protagonist finds herself reincarnated as the protagonist of her favourite otome game, Rei Taylor of Revolution. As to be expected, there are three handsome, dashing princes for her to try and woo, but Rei has no interest in them—no, her sights are solely set on Claire François, the rival character in the original routes.
Advertisement:

Also known as Watashi no Oshi wa Akuyaku Reijou (私の推しは悪役令嬢。) and originally translated in English as I Favor the Villainess, it is a Japanese Web Novel by author Inori (いのり。), originally posted here

. It is currently complete at 113 chapters (including the epilogue), and a light novel and manga adaptation currently having been published. Seven bonus chapters have been released, as well as one drabble through Twitter, and two sequels have currently been released. The unofficial fan translation can be found here.