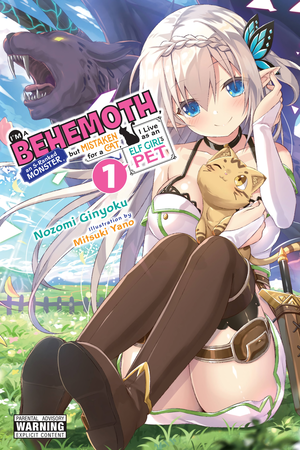 I'm a Behemoth, an S-Ranked Monster, but Mistaken for a Cat, I Live as an Elf Girl's Pet (Sランクモンスターの《ベヒーモス》だけどネコと間違われてエルフ娘の騎士として暮らしています) is a Light Novel series written by Nozomi Ginyoku and illustrated by Taro Shinonome.

The story features an unnamed knight that is resurrected in a dungeon as an infant "Behemoth" monster, and picked up by the elf-girl Aria when he gets mortally wounded. After she nurses him back to health, he decides to protect and serve her, for life. In turn, she is very, very grateful.

The light novel series was first published in 2018, and a manga adaptation began serialization in Young Animal magazine that same year. The light novels and manga are both licensed in English by Yen Press.

The work includes the following tropes: