Light Novel / If Its for My Daughter, Id Even Defeat a Demon Lord 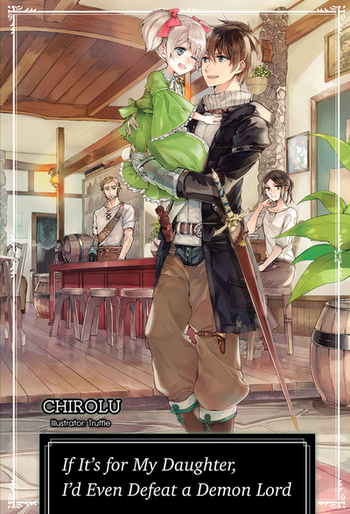 A devil girl and her doting father.Left to right: Kenneth, Latina, Dale, and Rita
He met a girl. A young girl branded with the mark of a criminal. That was the beginning of everything. "Crap, my girl's so cute." This is the story of the two who became an overly protective guardian and an adopted child, changing relationships, and furthermore until how that relationship evolves

Uchi no Ko no Tame naraba... aka For My Daughter, I Might Even Be Able to Defeat the Demon Lord is a Light Novel series written by Chirolu and initially illustrated by Truffle until volume 2 where Kei assumed the illustration of the series. It began serialization online in August 2014 on the user-generated novel publishing website Shōsetsuka ni Narō. It was later acquired by Hobby Japan, who have published eight volumes since February 2015 under their HJ Novels imprint. The series is published in English by J-Novel Club. The forthcoming eighth volume will be the last.

A manga adaptation with art by Hota has been serialized online via Kadokawa Shoten's Comic Walker website since July 2016 and has been collected in four tankōbon volumes. The manga is licensed in North America by Seven Seas Entertainment. An anime television series adaptation by Maho Film  premiered on July 4, 2019. Crunchyroll is streaming the anime, which can be viewed here

Dale Reki is an Adventurer who is on his way home from a job when he encounters a child and her dead guardian in the woods one night. Unable to leave her, Dale takes the girl, Latina, with him home to the Dancing Ocelot run by husband and wife Kenneth and Rita. Soon enough Dale and Latina develop a strong bond that leads him to make the only logical decision he can think of: he appoints himself her parent, to protect and raise her as his own.

Thus begins the daily lives of Dale and Latina as their bond as parent and child grows, exploring the world around them, and eventually getting up to some adventures together.