Light Novel / If Her Flag Breaks 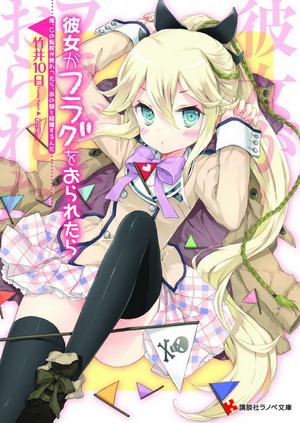 Souta Hatate is a high school boy who has the ability to see flags that provides choices during important events in life, which also allows him to see the future. Souta decides to break the flags instead of dealing with them in order to distance himself from others so they won't be involved with him, having had bad experiences with it in the past.That changes on his first day at Hatagaya Academy, when he prevents people from dying in a lorry accident, drawing the attention of one of his classmates, Nanami Knight Bladefield. Nanami doesn't trigger any flags, so Souta can't figure out how to make her go away, forcing him to reveal his power to her.

So begins a chain of events which results in Souta acquiring a harem as he tries to uncover the secrets behind his power.

If Her Flag Breaks, also known as Kanojo ga Flag o Oraretara (彼女がフラグをおられたら), is a series of fantasy romantic comedy light novels that started in 2011 and ended in 2016 written by Tōka Takei and illustrated by Cuteg. It has a manga adaptation that is serialised by Monthly Shōnen Rival. There are two manga spinoffs: one called Kanojo ga Flag wo Oraretara: Ooyuusha yo, Flag wo Tateteshimau to wa Nanigoto da!?, which is in a RPG Mechanics 'Verse, and another called Kanojo ga Flag wo Oraretara: Root Love, which has as yet no info in English. The series also had an anime adaptation in the Spring 2014 Anime season.Crunchyroll is streaming the anime, and may be watched here

If Her Flag Breaks provides the following: