Light Novel / I Saved Too Many Girls and Caused the Apocalypse 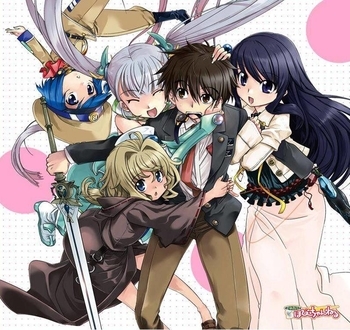 On Rekka Namidare's first day of high school, a strange uniformed being named R claiming to be from the future appears before him and tells him that his indecisiveness has caused a war of epic proportions, and that he must work to prevent that future.

To elaborate: There are stories involving worlds being doomed, and a hero is needed to save the day. However, there are worlds where there is no such hero. Namidare males carry the responsibility to go to such worlds, save them, and be their hero. The trouble came when Rekka's efforts caused many heroines of those worlds to fall in love with him, and he was unable to choose any of them, resulting in them fighting over him, sparking the cosmic war in the future R came from. R's purpose is to make sure he actually chooses one of the heroines he saves.

Things get complicated when his childhood friend Satsuki Ootomo, who wrote a letter intending to confess to him, nearly gets kidnapped by a mysterious man, and in his haste to get away with Satsuki, he runs away with the wrong girl: an alien girl who had fled from an Arranged Marriage from another world and had just happened to be on Earth, and at the scene. After getting into her spaceship, he then gets summoned to yet another world which is in danger of being overrun by a demon king...

And that's just day one.

Ore ga Heroine o Tasukesugite Sekai ga Little Mokushiroku!?note literally "I helped the heroine too much and the world turned into a little apocalypse!?", English title I Saved Too Many Girls and Caused the Apocalypse, is a Light Novel written by Namekojirushi with illustrations by Nao Watanuki (of Asura Cryin' fame). It was first published on June 1, 2011, and ran for sixteen volumes until October 27, 2019. A manga adaptation illustrated by Kouji Hasegawa was first released on April 27, 2012.