Light Novel / I Couldn't Become a Hero, So I Reluctantly Decided to Get a Job 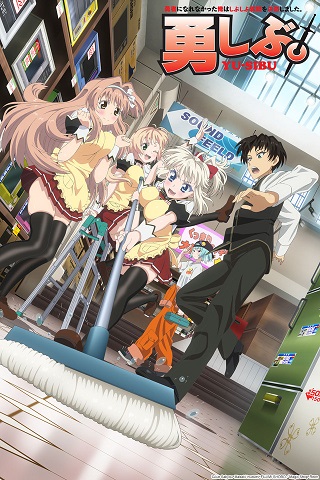 I Couldn't Become a Hero, So I Reluctantly Decided to Get a Job. (勇者になれなかった俺はしぶしぶ就職を決意しました。, Yūsha ni Narenakatta Ore wa Shibushibu Shūshoku o Ketsui Shimashita.) is a light novel series written by Jun Sakyou, with Masaki Inuzumi providing illustrations. It ran from 2012 to 2014, compiled into 10 volumes.

Raul had always wanted to be a hero, but unfortunately for him, the war against the Demon King ended before he could become one. He reluctantly took a job working at a small electronics store called Magic Shop Leon. His life is dull but busy until a new girl comes applying for a part-time job — a girl who's the daughter of the now-dead Demon King he once swore (and failed) to kill.

The series received an anime adaptation in the Fall 2013 season, which ran for 12 episodes. Crunchyroll is simulcasting this show here