Light Novel / I am the Sorcerer King 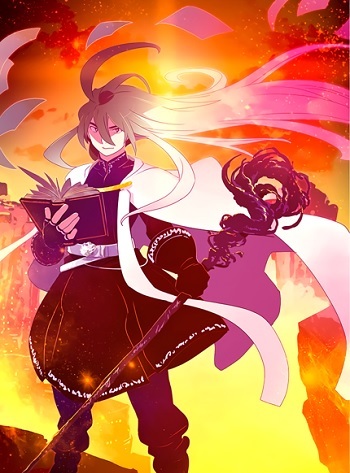 A weak Baiter who turns out to be a powerful Archmage.
Advertisement:

I Am The Sorcerer King is a Korean light novel series written by Decaspell, and is being adapted by the artist, Miro, into a webtoon manhwa. The series is primarily a real world action-fantasy adventure.

For the past 10 years, Earth has been under attack from a monster horde that appeared out of a rift formed through time and space. Ever since the event, people have started to awaken supernatural RPG-like powers, and began to hunt the monsters for fame and money. The protagonist, Lee Sunghoon, lives in South Korea in need of money to buy the cure for his mother's sickness. He remains powerless, but is athletic enough to take on dangerous jobs as a baiter who lures monsters for his hunting party to kill.

One day, Sunghoon is suddenly caught off-guard by a monster attack that results in his death, but during that moment, he remembers his past life as the Sorcerer King, Kuratauras, who died in a foreign world facing off against the great Black Dragon, Akaluman. It was during Kuratauras' final moments that he revealed to have activated a final trump card to reincarnate some time in the future in order to one day face off against the Black Dragon again. Sunghoon's dying moment causes the reincarnation to finally activate; resulting in his injuries healing, and him gaining all of Kuratauras' memories. This includes all the knowledge for Sunghoon to finally begin awakening his powers as a great sorcerer. From here on out, Sunghoon begins his overpowered magic show.

Alternative Title(s): I Am The Sorcerer King