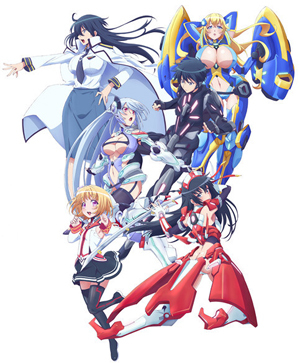 The series is set 20 Minutes into the Future. Humanity has been attacked and almost wiped out by giant magitech mechas from another universe, which appear through portals on landmasses above a certain size. The only known survivors live on floating structures called Mega Floats. Humanity's only defense against the invaders are personalized superweapons called Heart Hybrid Gears (HHGs). The story follows Kizuna Hida, a high school student who possesses the Heart Hybrid Gear Eros. His HHG gives him the power to recharge other HHG users' power levels by doing lewd things with them... much to his chagrin when he finds out.

An anime adaptation was created as part of the Summer 2016 anime season.

All spoilers for volumes 1-4 are unmarked and all character tropes must be moved to the proper character page.