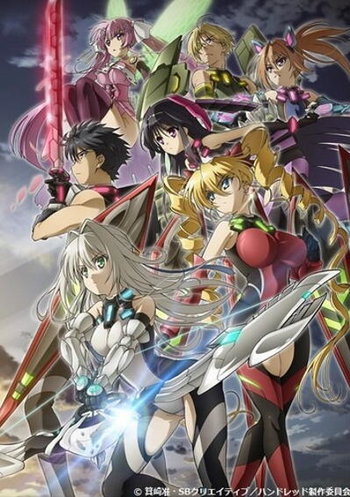 Hundred is a light novel series written by Jun Misaki and illustrated by Nekosuke Okuma.
Advertisement:

Mysterious lifeforms called Savages are attacking earth. The only weapon capable of countering them are Hundreds. Hundreds are battle suits wielded by a select few people known as Slayers.

Hayato Kisaragi wants to become a Slayer so he can earn money for his ill sister's medical treatment. To do so he enrolls in the marine academy city ship Little Garden. Day one and things aren't going well for him. Not long after meeting his roommate, Emil Crossford, who is strangely familiar with him despite the two having never met, Hayato finds himself being challenged to a duel by Claire Harvey, the Student Council president and strongest slayer on campus.

The series concluded in October 2018, with the release of its 16th volume.

The anime adaptation covers the first four volumes of the light novel, found on Crunchyroll

. The light novel after Volume 4 is currently being translated here