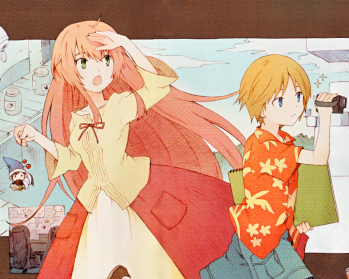 The U.N. Mediator and Her Assistant.
Advertisement:

Humanity Has Declined, known in Japanese as Jinrui wa Suitai Shimashita, is an eleven-volume light novel series written by Romeo Tanaka which ran from May 24, 2007 to September 16, 2016. The light novels were illustrated by Tooru Yamasaki from 2007 to 2011, but Yamasaki was later replaced by Sunaho Tobe, who took over the illustrations for the rest of the series.

For years, declining birth rates have forced what’s left of the human race to cede more and more territory to other beings who have appeared to take advantage of the emptying ecological niche. Now, only a handful of humans remain among the remnants of civilization and Earth is dominated by fairies — tiny, four-inch tall child-like creatures of surprising intelligence. But humanity’s importance isn't over quite yet, as the young heroine learns as she makes the decision to return to her hometown and assume her grandfather's position as an arbitrator between the races. Unfortunately, the job isn't going to be anywhere near as simple as she expected, and it's going to take a wisdom far beyond her years to achieve her most important mission.

An anime adaptation by studio AIC A.S.T.A. premiered as a part of the Summer 2012 Anime lineup and was simulcast on Crunchyroll

. It was licensed by Sentai Filmworks with a home video release in 2013. There are also three separate manga adaptations written by Romeo Tanaka himself.