Light Novel / How to Build a Dungeon: Book of the Demon King
aka: Maou No Hajimekata 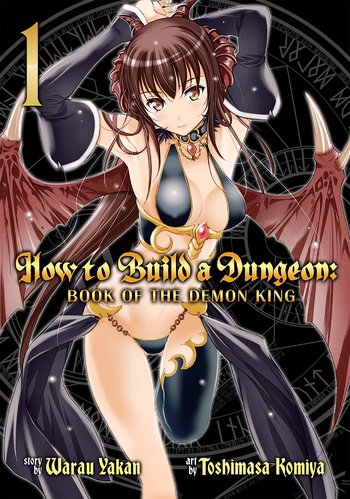 "I do not trust humans. They'll betray you without fail."
— Ein Sof Aur
Advertisement:

At the end of his life, in his elder years, Ein Sof Aur completed his lifelong research: a flask of pure concentrated mana. With this Aur prepares to engage his nefarious plans against humanity— though a human himself, he has harbored extreme hatred towards humankind, thinking they are nothing but vile creatures who in the end will betray one another for their own gains.

Aur rejuvenates himself with his newfound power and summons a demon to start his initiative: Lilu the Succubus. He makes a contract with her to assist him in building a dungeon headquarters where he will bring many followers to his cause and serve as a target for adventurers and the like to try against him, their defeats used to add to his strength.

From there on the misanthropic Aur makes several advances towards human settlements and kingdoms, demanding they become his subjects while using underhanded and downright evil methods to overthrow them. On the side, he has his way with various women...

Maou no Hajimekata (lit. How to get started as the Demon King) began as a series of free Adult Web Novels written by Warau Yakan in 2011, In 2015 he decided to make the once free hobby into a professional work and so it became a Light Novel series published by Kill Time Communication; now paired with an artist, Shindou Arata, Yakan decided to expand his original concept and make a broader story.

Also in 2015 the series got a manga adaptation called Maou no Hajimekata – The Comic, drawn by Komiya Toshimasa and written by Warau Yakan himself, the adaptation maintains the adult content from the novels by running in Comic Valkyrie, a seinen magazine, published by Kill Time Communication as well. Seven Seas Entertainment has picked the series up for English localization as How to Build a Dungeon: Book of the Demon King, the first volume released in October 2016.

Alternative Title(s): Maou No Hajimekata, How To Build A Dungeon Book Of The Demon King