Light Novel / How Not to Summon a Demon Lord 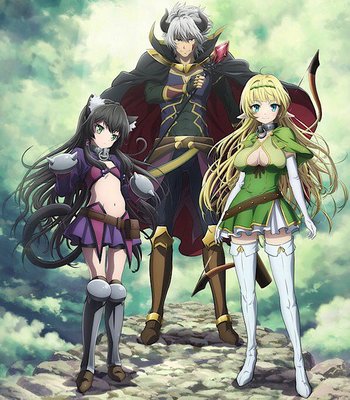 Our Demon Lord and his lovely slaves
How Not to Summon a Demon Lord is a Light Novel by Yukiya Murasaki with illustrations by Takahiro Tsurusaki.
Advertisement:

The MMORPG Cross Reverie had one player who was stronger than everyone else, earning him the nickname of "Diablo, the Demon Lord." In real life, however, he is Takuma Sakamoto, a boy with No Social Skills. One day, he gets sucked into another world, but with his appearance as Diablo instead of his normal form. There, the two girls who summoned him cast a spell on him to enslave him.

However, Takuma has a skill from Cross Reverie that reflects the magic back onto the girls, enslaving them to his will instead! Panicking, Takuma says to them "I'm amazing you say? Of course, I am. I'm Diablo... The one feared as the Demon Lord!"

Stuck in another world, Takuma (as Diablo) has no choice but to go on an adventure with his newfound companions.

or subbed on Crunchyroll here

. A second season of the anime, now animated by Tezuka Productions, premiered on April 9, 2021 on Crunchyroll.

How Not to Summon a Demon Lord provides examples of: