Light Novel / How a Realist Hero Rebuilt the Kingdom 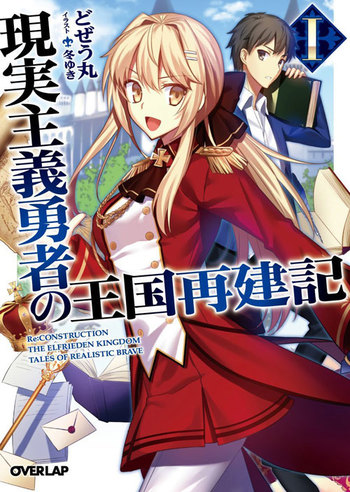 How a Realist Hero Rebuilt the Kingdom (現実主義勇者の王国再建記, Genjitsu Shugi Yuusha no Oukoku Saikenki) is a Japanese Light Novel series written by Dojyomaru and illustrated by Fuyuyuki with a Manga adaptation by Satoshi Ueda. The novels are licensed and published in English online by J-Novel Club and in print form by Seven Seas Entertainment.

Kazuya Souma is a student who has just started university when his grandfather dies. Before the latter's passing, Kazuya is told to get married and live a fulfilling life. Not long after his grandfather is buried, Kazuya is suddenly summoned to another world in the continent of Landia where various fantasy races exist. The king of the Elfrieden Kingdom, who summoned Kazuya, asks for his help as the demons from the Demon King's Domain have invaded from the North, forcing the various rival kingdoms to unite and fight the demons. Elfrieden, which is suffering from various economic and socio-political problems, including an influx of refugees whose homes were destroyed by the demons, is bullied by the larger Gran Chaos Empire to summon a hero from another world to help in the war effort.

Kazuya instead tells the king and his ministers how to help Elfrieden and make it stronger using his knowledge from Earth, including a "realistic approach" to solve the nation's grievances. Impressed, the king decides to abdicate the throne and make Kazuya the new ruler of Elfrieden, along with making his daughter, Princess Liscia, Kazuya's fiancee. Thus, Kazuya begins his quest to rebuild and save Elfrieden as its 14th ruler, "King Souma".

An Animated Adaptation by JC Staff premiered in July 2021 for 13-episodes, with a follow-up second part that will begin airing in January 2022.

Has a recap page in need of help.

Alternative Title(s): How A Realist Hero Rebuilt The Kingdom