Light Novel / Horizon in the Middle of Nowhere 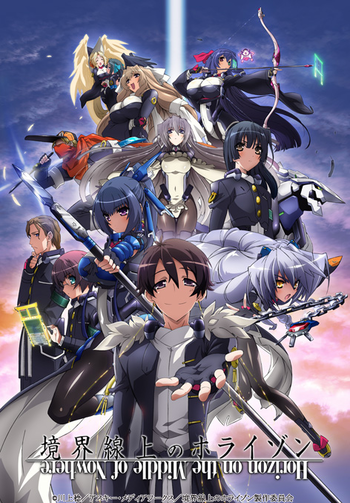 Just an ordinary student council tasked to rule the country, protect the people, and save the world
Advertisement:

Horizon in the Middle of Nowhere (Kyoukai Senjou no Horizon) is a set of school fantasy light novels by Minoru Kawakami, with an anime produced by Sunrise Studio 8 and a manga in Dangeki Daioh.

In the 20th century, it was discovered that there were ten universes parallel to our own, called Gears. Each Gear had their own fantastical races and laws of nature called Concepts. When it was found that the eleven Gears were destined to collide and destroy each other, the other ten Gears were destroyed and their Concepts were incorporated into our own. Using these new laws, mankind and the other races were able to uplift themselves to the state of gods, leaving behind a used and barren Earth. Before leaving, they activated three machines called the Elemental Gods to repair the planet in the event it was needed again. With that, they ascended to Heaven to live among the stars.

Unfortunately, even with their power and enlightenment, war would once more break out between the uplifted races. The war caused the deaths of most of the populace, destroyed the laws of causality, and forced the survivors to return to Earth. The Elemental Gods had repaired the planet, but had done so too well: The planet was now overgrown and inhospitable towards life. Through the power of their Emperor, the Japanese islands were cultivated to once more become livable, and were renamed the Divine States. For a time the survivors bickered and warred with each other despite their precarious predicament, until they began to implement the policy of History Recreation.

Using the Testament, a book connected directly to the concept of fate, the survivors could manipulate the Concepts to retrace their steps and rediscover the secret to their lost divinity by re-enacting history. In order to facilitate this, history was split into East and West and staged in different areas: Eastern history would be recreated in the Divine States, while Western history would be recreated in a pocket dimension made by the Emperor called the Harmonic Divine States. Starting from 10,000 BC, the system worked well to stop pointless wars by making skirmishes pre-determined, in line with historical battles. Tragedy wouldn't strike again until 1413 AD during Japan's Nanboku-chou Wars, when the three Regalia of Japan which the Emperor was using to maintain the Harmonic Divine States disappeared.

Without the Regalia, the Harmonic Divine States collapsed onto the real world, severely damaging the planet as well as over-writing over small areas of reality. The Harmonic States banded together and invaded the Divine States in retaliation, conquering them. As penance for destroying the Harmonic Divine States, the locals had their lands stripped from them, were barred from forming a standing army, and had their power limited to only what was needed for History Recreation. In order to continue on, each nation would take on both Eastern and Western history simultaneously. The countries as they are now each represent a European country active in the 30 Years War, as well as a daimyou in Japan's Sengoku era.

The Testament, which is supposed to update automatically and show recorded events up to 100 years in the future, abruptly stopped updating in 1548. This is assumed to mean one thing: in 1648, something will happen that will destroy the concept of fate, destroying the universe. The deadline is approaching fast, with no clear plan in place besides P.A. ODA's mysterious Genesis Project. The story begins on the Far East's only remaining "land", the Quasi-Bahamut Aerial City-Ship Musashi, and centers around its Student Council, led by their president Toori "Impossible" Aoi. When an automated doll resembling Toori's deceased childhood friend, Horizon Ariadust, appears on the ship, the stage is set as he prepares to pick a fight with the rest of the world to get back her lost emotions and save the world from the impending apocalypse.

Horizon in the Middle of Nowhere is chronologically the fourth entry of six in author Minoru Kawakami's universe, though the entries haven't been produced in that order.

The animated adaptation of the first volume produced by Sunrise began airing in the Fall 2011 season, with the manga starting publication at the same time. The second season began broadcasting in Summer 2012. The series is licensed by Sentai Filmworks, and is available online at Crunchyroll

, Horizon in the Middle of Nowhere

, On a Godless Planet

Note: Some spoilers for the light novels are here!

Horizon in the Middle of Nowhere provides examples of:

Alternative Title(s): Kyoukai Senjou No Horizon, Horizon In The Middle Of Nowhere