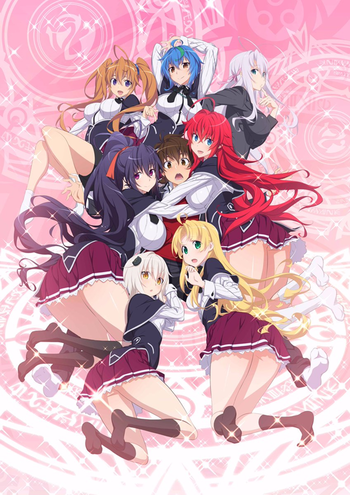 High School D×D is a Light Novel series written by Ichiei Ishibumi, illustrated by Miyama-Zero and published by Fujimi Shobo that has been adapted into a manga (with a Lighter and Softer Spin-Off titled Asia and Koneko's Secret Contracts) and a popular anime produced by TNK which continued with a fourth season premiering in April 2018, this time animated by Passione. The anime is rated R15+ in Japan. The series is well-known for mixing fanservice with a compelling story and developed characters. A lot of characters, with many of those based on almost all religions and mythologies. It can be best summed up as a mix-and-stir of To Love Ru (or Girls Bravo) and Shin Megami Tensei.

The anime is licensed by FUNimation for both subtitles and English dubbing, while the original light novels and the manga adaptation are both licensed by Yen Press. As of February 2020, the anime's first season is also available on Netflix in Europe. Two licensed games have also been made, one for the Nintendo 3DS, based on the anime's first season, and one (free-to-play and digital only) for the Play Station Vita, instead based on the anime's second season. Unfortunately these two games won't seem to see the light of the day overseas anytime soon.