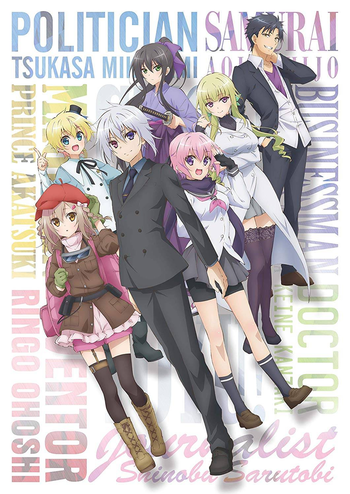 High School Prodigies Have It Easy Even In Another World (超人高校生たちは異世界でも余裕で生き抜くようです! Chōjin-Kokoseitachi wa Isekai demo Yoyu de Ikinuku Yōdesu!), abbreviated as Chōyoyū (超余裕), is a 2015-2020 Light Novel series written by Riku Misora, the author of Chivalry of a Failed Knight and illustrated by Sacraneco, published by SB Creative under the "GA Bunko" imprint. It is also adapted into an ongoing 2016 manga series illustrated by Kōtarō Yamada for Square Enix's Young Gangan magazine, as well as a 2019 anime series by Project No.9. The manga and light novel were licensed by Yen Press in 2018 and 2020 respectively.
Advertisement:

The series follows seven Japanese high-school prodigies who are expert in their own fields, who find themselves in a Fantasy World after their plane mysteriously crashes. While befriending the locals, the Prodigies learn this world isn't nice since the people suffered from the tyrancial and corrupt nobles of The Empire, who abuse and mistreat their subjects. While the Seven Prodigies try to find a way back home to Earth, they also help their new friends battle the evil nobles while helping its people with their knowledge and inventions from Earth.