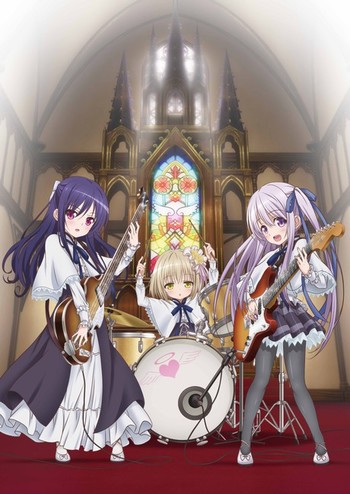 Kyou Nukui is a first-year high school student who, due to a traumatizing past, constantly skips school and thus lives as a hikikomori, creating Vocaloid songs as a hobby and uploading them online.
Advertisement:

One day, he receives an email from three girls, Jun Gotou, Nozomi Momijidani, and Sora Kaneshiro, who were raised together like sisters since childhood and have just entered fifth grade, requesting a meetup. It turns out the girls want to form a band together, and they ask for Kyou's help.

Discotek Media licensed the show, localizing it under the title Angel's 3Piece! with a release date for the Blu-Ray set for March 31st, 2020.

Jun finds herself in a bit of an urgent predicament.

Jun finds herself in a bit of an urgent predicament.