Light Novel / Hensuki: Are You Willing to Fall in Love with a Pervert, as Long as She's a Cutie? 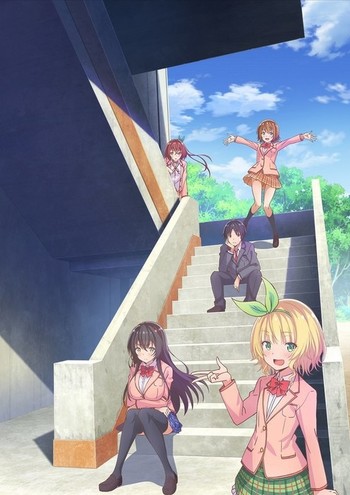 The series later received a manga adaptation (illustrated by CHuN) in November 2017 and an anime adaptation premiered on July 8, 2019. It is also currently licensed by Funimation.

After putting away cleaning supplies for the Calligraphy Club and returning to the clubroom, Keiki Kiryū finds an anonymous love letter addressed to him, along with a pair of panties. As someone who desperately wishes to have a girlfriend, Keiki decides to find the sender of the letter and panties, and starts by narrowing the list of suspects to the girls who were in the clubroom before he left. Unfortunately, his investigation of these girls reveals that while all of them have feelings for him, they're also hardcore perverts who want him to participate in their fetishes! Would Keiki be willing to fall in love with any of these perverts as long as they're cuties?

This light novel and anime series provides examples of: