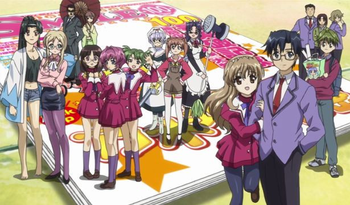 Originally a series of light novels by Yuusaku Igarashi that were published in 16 volumes from 2004 to 2012, it was later adapted to anime in the summer of 2008. A second season, Nogizaka Haruka no Himitsu Purezza, aired in the fall of 2009. A third season, to tie in with the final volume of the light novels, was released as 4 OVA's between August and November 2012.