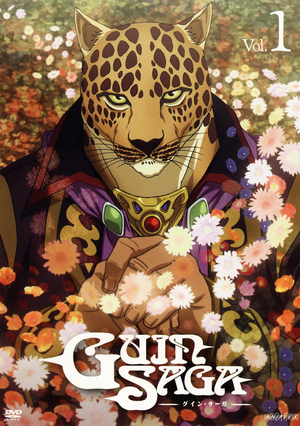 Guin Saga is a huge (130 volumes) series of High Fantasy Light Novels written by Kaoru Kirimoto in a sword-and-sorcery world, arguably The Lord of the Rings of the Japanese fantasy genre, due to how it defined the genre.

It begins with the Twins of Parros, Rinda and Remus, being transported by a magical device from their homeland as it is being invaded by the army of Mongaul. They awake in the Roodwood, and find Guin, a Conan the Barbarian-like warrior with a leopard head, who can remember nothing but his own name. He ends up their 'knight' and agrees to help them home, with plans to also remember his forgotten past. In due time, they fight with spirits, are captured by The Black Baron, meet a cameo of future characters before jumping into the river Kes to escape a raging inferno. This ends the first book.

As the story progresses, more characters are introduced, and at times it's even difficult to remember who the designated protagonist is at any given time. Any of the story's arcs include fighting, political intrigue and lots of Character Development.

The series started in 1979 and ran all the way into the late 2000's. For the first 19 volumes, the art was done by Naoyuko Kato before the job was taken up by Final Fantasy artist Yoshitaka Amano until volume 57 when he was replaced by Jun Suemi. Shinobu Tanno replaced him at volume 88.

In 2003, the first three books of the series were published in English as hardcover versions, sans any of the original art, by American publisher Vertical. Vertical later republished these books (as well as the following two) in paperback form with the original cover art and insert art in 2007. However, they had said there are no plans to release any more volumes, despite each book ending on massive cliff hangers, as the sales weren't that high, despite several positive literature reviews. The novels have also been published in German, French, Russian, Italian, Korean and Chinese.

There have been two manga adaptations, the first being The Guins Saga Manga: The Seven Magi. Self-contained, the manga requires some understanding from the books before being read and ended with 3 total volumes. The second takes the name of the book and begins with book 1, and is still running with 4 published volumes as of 2010.

An anime adaptation was broadcast by NHK between April and September 2009 with 26 total episodes that cover the first 16 volumes. Sentai Filmworks licensed the series for English distribution and released the series in two parts.