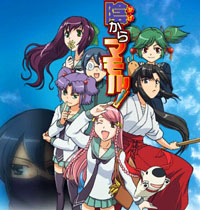 A series of Light Novels (later adapted into a 12-Episode Anime) about teenage nerd Mamoru Kagemori and his childhood friend Yuuna Konnyaku who, being quite The Ditz, gets into trouble quite often.