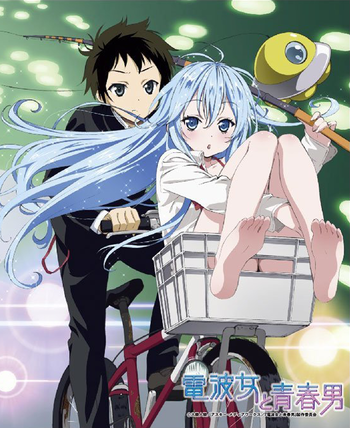 16-year-old Makoto Niwa thinks he's about to live the dream life: with his parents conveniently away on business, he moves out to the big city to live with his 39-year-old aunt, Meme Touwa. Cue dreams of having the house all to himself, surrounded by pretty city girls and living out a normal adolescent life.

All that comes to a screeching halt the moment he steps into Meme's home to find a young girl — Meme's hitherto unknown daughter and his cousin, Erio — wrapped in a futon lying on the front step. Worse than that, she speaks strangely. And thinks she's an alien.

Ground Control to Psychoelectric Girl (Denpa Onna to Seishun Otoko; lit. Electrical Wave Girl and Youthful Man) is a series of light novels written by Hitoma Imura and illustrated by Buriki, which were published from 2009 to 2011 with a total of eight volumes. The story follows Makoto as he finds out more about his confused cousin and her strange beliefs about how their entire lives are nothing but a huge alien experiment.

An anime adaptation by Studio Shaft aired from April to July 2011.

Tropes in Ground Control to Psychoelectric Girl include: