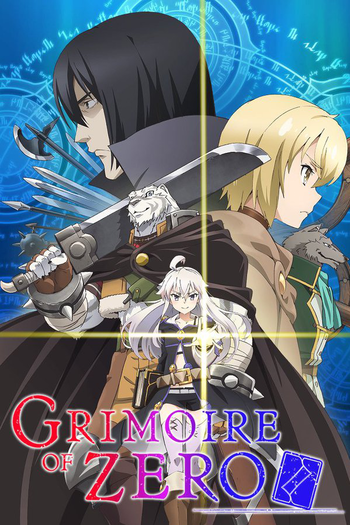 A half-human, half-beast mercenary wishes to become fully human. He makes an agreement with a witch known as Zero, who will fulfill his wish if he acquires the "Grimore of Zero" for her, which was stolen by bandits.

Grimoire of Zero (ゼロから始める魔法の書 Zero kara Hajimeru Mahō no Sho, lit. Starting the Magical Book from Zero) is a light novel series written by Kakeru Kobashiri with illustrations by Yoshinori Shizuma, published under the Dengeki Bunko imprint and has so far spawned 9 volumes since February 8, 2014.

A manga adaptation illustrated by Takashi Iwasaki commenced publication in the Dengeki Maoh magazine since December 27, 2014, and so far spawns 4 volumes.

An anime adaptation by White Fox aired as part of the Spring 2017 Anime lineup, and ran for 12 episodes.

A sequel, Mahoutsukai Reimeiki aka The Dawn of the Witch, was released as a Light Novel in 2018 with an anime as part of the Sping 2022 lineup.

Not to be confused with Re:Zero, nor are they related in any way. Also not to be mistaken for The Familiar of Zero, despite their somewhat similar names.

The Grimoire of Zero contains the following tropes: