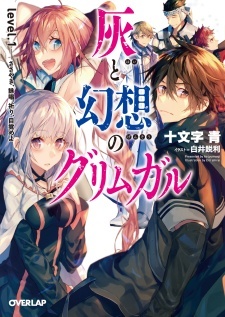 Grimgar of Fantasy and Ash (Hai to Gensou no Grimgar) is a Japanese light novel series written by Ao Jumonji and illustrated by Eiri Shirai, which began publication in 2013. A manga adaptation was serialized in Gangan Joker from 2015 to 2016. An anime adaptation produced by A-1 Pictures and directed by Ryosuke Nakamura premiered in January 2016, and ran for 12 episodes.

Haruhiro wakes up in a mysterious fantasy world, along with several other young adults. None of them can remember how they got there or any personal details aside from their names. They have no choice but to join the Frontier Army's Reserve Force, Crimson Moon, as volunteer soldiers. These volunteer soldiers act as freelance monster exterminators, killing monsters and turning in the loot for cash. Haruhiro forms an adventuring group with Yume, Shihoru, Ranta, Manato, and Moguzo. Unfortunately, they are very inexperienced and must struggle to kill even the weakest monsters.

The light novels have been licensed for English release by J-Novel Club, which began releasing translated ebooks in December 2016, and by Seven Seas Entertainment for physical releases beginning June 2017.

The story has entered its final arc as of Volume 15.

Grimgar of Fantasy and Ash provides examples of these tropes: