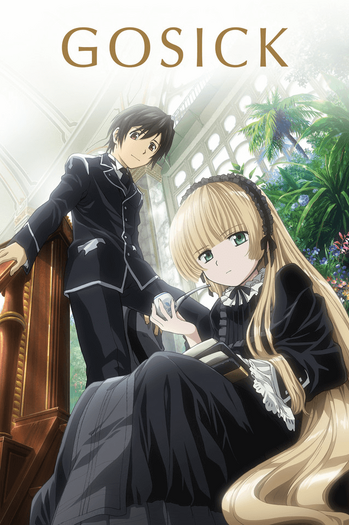 Gosick (-ゴシック-, Goshikku, Gothic) is a Japanese Light Novel series written by Kazuki Sakuraba, illustrated by Hinata Takeda and published by Fujimi Shobo. The first novel was released on December 10, 2003. The ninth and final one was published on July 23, 2011. GosickS, a series of short side stories set in this universe, released four collections total. Tokyopop licensed the novels in the United States and has released the first two.

The story is set in 1924, in the fictional European country of Sauville (also known as Saubure). At St. Marguerite Academy, a school where the students love to gossip about horror stories and urban legends, many real mysteries find their way into school lore. There, Kazuya Kujo, a Japanese transfer student and the third son of an Imperial soldier, meets Victorique, a strange girl who is so small and beautiful that she can easily be confused with a living bisque doll. Her intelligence and smoking habit, however, make her resemble Sherlock Holmes more than Shinku. She spends her days skipping class, reading multiple books at a time on the top floor of the library, and solving mysteries so difficult they have even the police stumped. As the series progresses, Kazuya and Victorique continue to get involved in strange cases, where they meet many kinds of people, both good and bad. Despite the moe-style art, its tone is rather serious.

A manga adaptation, illustrated by Amano Sakuya, ran in Monthly Dragon Age until 2012. A drama CD, based on the first volume of GosickS, was released on April 21, 2006. An 24 episode anime adaptation by Studio Bones began airing on January 7th, 2011. Finally, a novel series set before the original series's Distant Finale, Gosick New Continent, was launched in 2013, lasting until 2016.

In America, Bandai Entertainment licensed the anime, although they decided to stop distributing DVDs before they were able to give it a physical release. However, the Gosick anime was streamed

by Crunchyroll until their license expired in August 2014, and Australian licensee Madman Entertainment released the series in in two DVD volumes

as well as streaming it on their site. Funimation currently holds the North American license to the series and released it on home video with an English dub in May of 2017.