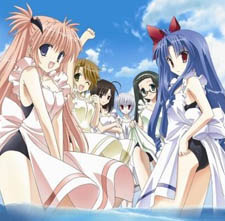 Good Luck! Ninomiya-kun (Goshūshō-sama Ninomiya-kun) is a Light Novel series written by Daisuke Suzuki and illustrated by Kyourin Takanae, which was first published in Dragon Magazine from 2004 to 2009 and later compiled into 17 volumes. It's essentially a Fanservicey Love Triangle between a Badass Normal, a Moe succubus, and a Tsundere Ojou turned Meido.

Shungo Ninomiya is a mostly Ordinary High-School Student. One day, his sister Ryoko sends Mayu and Mikihiro Tsukimura, two siblings, to live with him to help Mayu overcome her problems. She has a fear of men... and she also happens to be a succubus who can't turn off her power to attract them. Shungo, always well-behaved around women, seems to have some resistance, though Ryoko pushes this to the limit by having them do "training" like sharing a bed and making mock confessions. And then there's the student-council chair, Reika Hojo, who somehow ends up becoming their maid...