Light Novel / Gonna Be the Twin-Tail!! 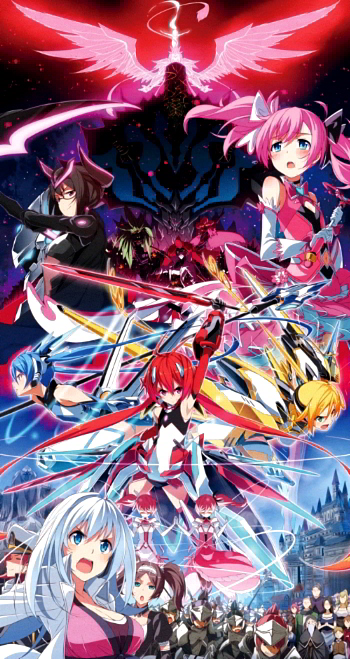 Fight for your twintails!
"If you love twintails in your heart, anything is possible!"
— Tail Red
Advertisement:

Gonna Be the Twin-Tail!!, (Japanese name Ore, Twintail ni Narimasu! [俺、ツインテールになります! — "I will become a Twintail!"]) is a 2012 Light Novel series written by Yume Mizusawa and illustrated by Ayumu Kasuga.

Souji Mitsuka, age 15, loves twintails. Actually, that's an understatement — if there was such a thing as a twintail pervert, Souji would be it. This exasperates his long-suffering childhood friend Aika Tsube, who just wishes that he'd be more normal.

One day however, a buxom woman from another world named "Twoearle" asks Souji to save the Earth from a group of extraterrestrial invaders looking to steal everyone's... twintails? To help Souji, Twoearle gives him a Transformation Trinket that will turn the teenage boy into Tail Red, a super powered, armor clad... little girl with twintail hair? Eh, details, details. And so to protect his precious twintails, Souji sets off to become a hero in an increasingly ridiculous Affectionate Parody of Super Sentai and Magical Girl Warrior works, recruiting others like Aika and the Student Council President at Souji's school, Erina Shindou, along the way.

Twintail is published by Shogakukan under its "Gagaga Bunko" imprint, and stands completed at 19 volumes.

A manga adaptation illustrated by Ryota Yuzuki ran from 2014 to 2015 in Monthly Big Gangan, and spawned 2 volumes.

It also has a 12-episode Animated Adaptation directed by Hiroyuki Kanbe and produced by Production IMS that aired as part of the Fall 2014 Anime season and can be legally watched on Funimation's website.

Gonna Be the Twin-Tail!! provides examples of:

If you love twintails, anything is possible!