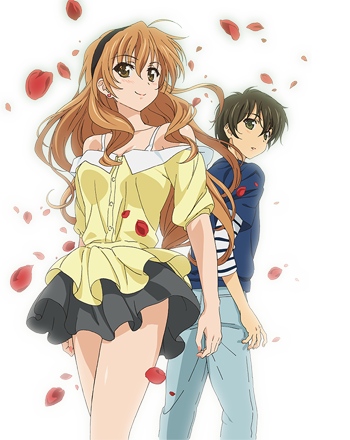 The heroine and the main character, Kouko Kaga and Banri Tada.
Advertisement:

Banri Tada has just been admitted to Fukurai University, a prestigious private law school in Tokyo, hoping to start anew after a fall off a bridge the day after his high school graduation rendered him amnesiac. Being a country boy from Shizuoka Prefecture, who has just entered Tokyo for the first time, he naturally loses his way, in the process meeting Mitsuo Yanagisawa, himself another lost newcomer, and both young men immediately got off to a good start.

As luck would have it, however, just as they reach Fukurai, Banri and Mitsuo run into a beautiful girl about their age, carrying a bouquet of roses... who proceeds to repeatedly whack Mitsuo in the face with said bouquet before wishing him well in his studies and leaving.

As Mitsuo explains to Banri, that beautiful girl is Kouko Kaga, a young heiress to a hospital magnate, who forced a marriage promise from him back in their grade-school days. Fed up with her aggressive behavior towards him, Mitsuo secretly took Fukurai's entrance exams to escape her and, like Banri, start anew. Unfortunately for him, it seems that Kouko has tailed him, and is now sharing the same classroom as both boys, claiming she is not giving up on Mitsuo, to the point of having Banri help her keep in touch with him.

Add to the mix Nana "Linda" Hayashida, a second-year member of the Festival Club, Takaya Sato, an otaku freshman, Chinami Oka, another first-year who looks too young for her age, and Nana, an aloof third-year, and Banri, Kouko and Mitsuo may just have the time of their lives.

Golden Time is a light novel series published between 2010 and 2013 written by Yuyuko Takemiya, writer of Toradora!, and illustrated by Eiji Komatsu (of Maburaho fame), published by ASCII Media Works under its Dengeki Bunko brand. It also has an manga adaptation illustrated by Umechazuke, which was also serialized in ASCII's Dengeki Daioh manga anthology from 2011 to 2016; it's been licensed by Seven Seas Entertainment for English-language release starting in late 2015. It also received a 24-episode anime adaptation starting Fall 2013, directed by Chiaki Kon and produced by JC Staff (which also adapted Toradora!), deliberately scheduled to end its run at almost the same time as the novels themselves. Sentai Filmworks released the anime on video in North America (subtitled only in 2014-15, rereleased with an English dub in 2019).

Tropes in Golden Time include:

Banri pretends that he and Mitsuo are a couple to chase off an annoying girl.

Banri pretends that he and Mitsuo are a couple to chase off an annoying girl.