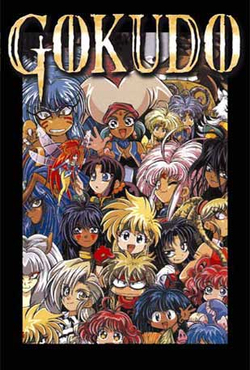 Gokudō, or Gokudō the Adventurer, is a Light Novel, Anime and Manga all developed off the original concepts of Usagi Nakamura.

Initially beginning with a light novel, Gokudō-kun Man'yūki penned by Usagi Nakamura with illustrations by Takeru Kirishima and published by Kadokawa Shoten between June 1st, 1991 - September 1st, 1999 with 13 volumes. The success of the first light novel warranted a second and Gokudo-kun Man'yūki Gaiden was soon developed by the same writer and illustrator. This time published under Media Works beginning on June 10th 1993 with an ongoing publishing run of 10 volumes.

The Light Novels were followed by a Seinen Manga adaptation, published by Kadokawa Shoten and enjoying a run in Dengeki Daioh magazine from 1995 - 2000. As the Manga was still in production, a TV Anime adaptation was put into development by studio Softx. The Anime adaptation spanned 26 episodes directed by Kunihisa Sugishima and running between April 2nd, 1999 - September 24th, 1999, airing on the TV Tokyo network.

All adaptations of the work share the same basic premise and story; Gokudo an adventurer and Anti-Hero, discovers a magical Genie named Djinn who wants to grant him three wishes. This inevitably leads to number of problematic situations and misadventures for Gokudo.