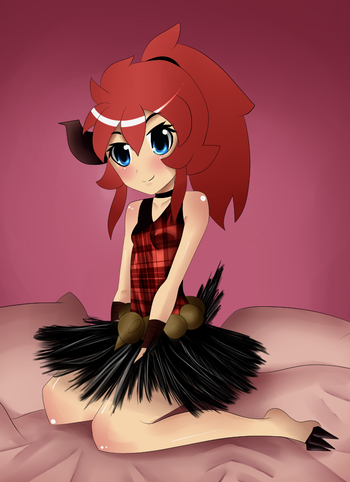 Ana is the sweet innocent heroine of the story... who may or may not have destroyed mankind.
"The entirety of man simply ceased to be. The Mortal Plain now houses gods, no longer deified; vagrants who seek the reason and purpose they once provided."
—The Phantom Queen Narrator
Advertisement:

is an English-language prose serial in the tradition of the Japanese light novel. It is written and illustrated by the artist circle Name Pending Creations

. It follows the lives of several individuals from the viewpoint of a variety of gods from varying mythologies. The story begins fresh after a mix of Norse Mythology's Ragnarok and the Christian Apocalypse, and finds the many pantheons trying to recover after the loss of their families and the mortals that imbued them with their godlike power.

The novel is serialized online through Inkitt

is also available and currently covers the first chapter. It updates about once a month.