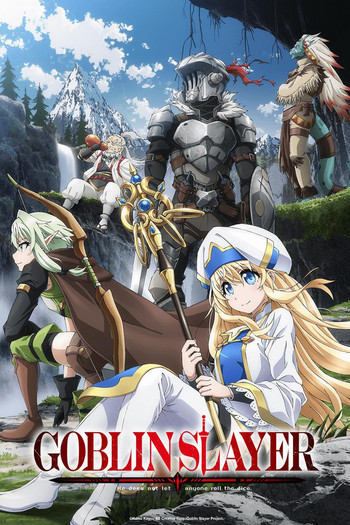 He does not let anyone roll the dice.
"I won't save the world. I just kill goblins."
Advertisement:

In a Standard Fantasy Setting world, a fifteen-year-old priestess, fresh out of the convent, is drafted by a party of rookie, Porcelain-ranked adventurers who've taken a mission to eradicate a nest of goblins, creatures with the size and strength of a small child. While dangerous in large numbers, they're nothing that a group of low-level adventurers can't handle... right?

Having not taken the most basic precautions (like buying healing potions and antidotes), the party is soon ambushed, with the goblins killing or raping them one by one, until only the priestess is left. Wounded and surrounded, the priestess faces certain doom... until a man in battle-scarred armor walks in, and proceeds to brutally slaughter the entire goblin nest, children included.

He is the Goblin Slayer, and he does not let anyone roll the dice.

Goblin Slayer is a Japanese Dark Heroic Fantasy Light Novel series written by Kumo Kagyu and illustrated by Noboru Kannatsuki. Its story follows the Priestess and other adventurers as they accompany the Goblin Slayer on his life's mission to kill every last goblin he can find. As a (partial) Deconstruction of standard fantasy works, the series emphasizes the power of Boring, but Practical equipment and tactics, how Anyone Can Die if not careful, the dangers of epic heroes not bothering with "low level" quests, and just how warped a Dark and Troubled Past can make someone. In equal measure, it also emphasizes how True Companions can pull each other through the darkest of situations through teamwork, smarts, and plain old tenacity, fighting for what they believe in.

Heavily inspired by tabletop role-playing games, the whole story spawned from the author, Kumo Kagyu, asking himself "What would a fantasy world be like if it were home to an adventurer who only hunted goblins?" Then he went on to post an outline of the story on an image board, 2ch (Futaba), to gauge fan interest before it became an official work. Curiously enough, he posted the story with character images coming from Dragon Quest and other known series in Japan as placeholders for his characters in the original thread — Goblin Slayer in particular was portrayed by the Infernal Armor monster in the aforementioned famous series, of which the official Goblin Slayer design is very reminiscent of.

Yen Press has licensed the Light Novels and Manga into English. The series consists of the following:

White Fox received the rights to adapt a 12-Episode Anime (later expanded with a Recap Episode before the final Story Arc) in October 2018, with Crunchyroll simulcasting and an English dub provided by Funimation. An Original Video Animation entitled Goblin Slayer: Goblin's Crown was released on February 1, 2020 in Japanese theaters, with a physical disc release on July 29, 2020, while Crunchyroll broadcasted it as a special digital event on July 28.

On January 31, 2021, a second season of the anime was announced to be in production at the GA Bunko online festival.

There have also been crossovers with Grand Summoners and Memoria Freese.

More recently, an Abridged version of the anime exists, created by Grimmjack of the Schmuck Squad.

Goblin Slayer does not let anyone, even tropers, roll the dice:

The party disguises themselves as followers of chaos and their captives in order to gain entry to a dwarven fortress occupied by goblins.

Example of:
Dressing as the Enemy

Canary in a Sewer

The party disguises themselves as followers of chaos and their captives in order to gain entry to a dwarven fortress occupied by goblins.

Canary in a Sewer